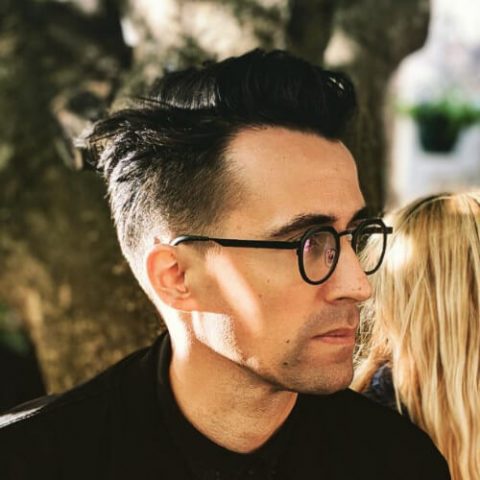 Johnny Dean Mann is a writer, poet, and visual artist. Based in the UK, Johnny collaborates with humans and machines worldwide to make web3 more accessible to creatives and the public. He co-founded The Tickle magazine in 2021 and publishes his own NFTs under the name WilyGuys. In this conVERSEverse with Johnny, learn what motivates him about web3, why he loves Tezos, and what makes him optimistic about the future of poetry NFTs.

VV: How did you get into poetry NFTs?

JDM: I’ve always been a poet and a writer, but I focused more on the visual art of NFTs at the start. The space opened up very quickly. It went from putting up jpegs and selling them to this space of profound changes for culture itself, and that included writing. I hadn’t met Ana [Caballero] or Sasha [Stiles] or anyone in theVERSEverse before I started my first poetry project in collaboration with Anna Malina called Canoeing Time, 1992. Then I quickly got up to speed with GPT3 through Sasha and James Yu who is producing a lot of interesting NFTs based on the written word. James invited me to sign up for Sudowrite and I started experimenting with that. (See Managed Miles and SLOW GODS)

Machine-human collaborations are very profound. It’s not just between artists and artists and writers, it’s everyone interacting with this new, hulking machine which is improving and changing all the time. We are all in this poetic ball rolling down hill and no one knows where it’s going to end up! The written word and poetic expression have found not just a new voice, new tools.

VV: Tell us about how The Tickle started.*

Originally, Maia Mellier and I thought, why don’t we make a zine? The technology, the motivation, and the ability to move quickly and connect to artists – it was all there.

The very first issue started with creative writing in mind, and we featured 3 artists that we liked. We published it as an NFT for a minimal price of 0.5 tez so everyone can afford it. We started doing subscriptions too. It started as 12 pages and I think the last issue was about 50. But you don’t have to buy the magazine to read it. You can just read it. That will continue forever, I can guarantee that.

In the early days, Theo Horsmeier came on board, and eventually we brought on Joanne Rush as a literary consultant. She was instrumental in launching The Tickle Lit and transforming everything to a higher quality. Now, monochromatikal, who is a design layout genius, does the design of the zine every week.

The mission of The Tickle is to provide context to these fantastic artworks and artists in the very fast-moving twitter + NFT space. In a way, we have an ongoing curatorial board. Each featured artist recommends 5 other artists every week, and they are often people that we’ve never heard of. It’s really important that we do it that way. We concentrate on being diverse in our selection. We aren’t perfect, but we do our best.

I’m really proud of the consistency. We’ve had a Twitter Space for every single issue for 52 weeks. It could easily be put off, but it’s not. We made sure that didn’t happen.

The Tickle is cheap, it’s free, it’s available, it’s for the community.

VV: Why do you use Tezos?

JDM: The Tezos blockchain is a profound part of the web3 landscape in the sense that it’s truly an international community effort. This is enabled by the low cost and low barriers to entry. If you are anywhere other than in Western Europe and America, Ethereum is not practical. The gas fees for minting artwork are a month’s wages in some places. If you’ve got this new paradigm of culture exclusively populated by white American men, that’s a disaster for culture.

Tezos is open to all and affordable. I may sound like a bit of a socialist here but it’s not that – it’s about access. Access for all is important. You get talent from everywhere: from an Inuit village in northern Japan, to an island in the Philippines, or a rural town in Turkey – there’s talent everywhere in terms of the arts.

Tezos is the only place in the history of culture where everyone and anyone can get involved and be prominently known and featured in a short amount of time. It’s fantastic.

VV: If there was one thing in the NFT space that you could change or see done in a different way, what would it be?

JDM: As a community, we aren’t doing as well as we could to attract people outside the space. For us in the space, it’s second nature, but from the outside, it’s this complicated mess of scams and plummeting value.

There’s a lot to change, but the NFT space has evolved so profoundly and effectively in just the last year that all I can see in the future are positives. We’re still in early days. It’s like the dirty little punk clubs where the Sex Pistols were playing – we’re at CBGB where the Ramones are playing their first gig. We’ll look back on this in the next two or three years and we’ll see this stage as formative. In 20 to 30 years, people will see this moment as a huge cultural shift. It will get a lot bigger, but we need to be patient and also make efforts to encourage other people to join.

One of the founding ideas with The Tickle was to attract people outside of crypto. I’m trying to push it to be this web2-friendly thing so that people can see the content, the artists, and the writing in the space without necessarily opening a wallet.

VV: Where do you see the space going?

JDM: I think it’s possible, even probable, that we will raise poetry and the written word in general to a higher level of cultural appreciation. If you were in the 1950s or 1960s, poets were famous – everyone knew Sylvia Plath or Ted Hughes. But as culture expanded and changed in the decades towards the end of the 20th century, poetry got pushed out toward the edges and couldn’t find a way into the mainstream as easily. It’s quite niche compared to what it used to be.

About a year ago when we started, I didn’t know many poets who were doing NFTs and I worried if we would have enough poets to fill the pages. It turns out that was not a worry at all. There are so many quality writers that it was impossible to fit them all in. In fact, we released a new quarterly literary-only journal in June 2022 called The Tickle Lit to do just that.

In the future, if you can walk down the street and say to a stranger, “Name me a poet,” and they say, “Merchant Coppola” or “Sasha Stiles” that would be superb. I think we can get there. The art of creative poetic writing is coming back. These initiatives, The Tickle, theVERSEverse, and all the individual poets and writers out there improve the conditions for creatives.

VV: What would you say to people entering the space? Tips or guidance?

JDM: Everyone I know who is doing anything creative, I tell them to come join! Go use Tezos! The sense of community here is really powerful. It’s truly global and it goes across all metrics of accessibility. It’s life changing. Not in the financial sense: I’ve not gotten rich, and most people don’t. I’ve got a lot more culturally rich and creatively empowered, that’s way more important than the money you can make.

Denise Duhamel is an inaugural theVERSEverse poet with an esteemed...